Home » Database of Toxins » Dangers of Artificial Flavors: Are They Safe?

With nearly 90% of Americans spending the bulk of their grocery budget on processed foods, the dangers of artificial flavors within them are worth investigating.

Today more than ever, we are exposed to additives, preservatives and fake flavorings in overwhelming numbers – over 3,000 to be exact.

Are artificial flavors bad for your health? We aim to answer that today. 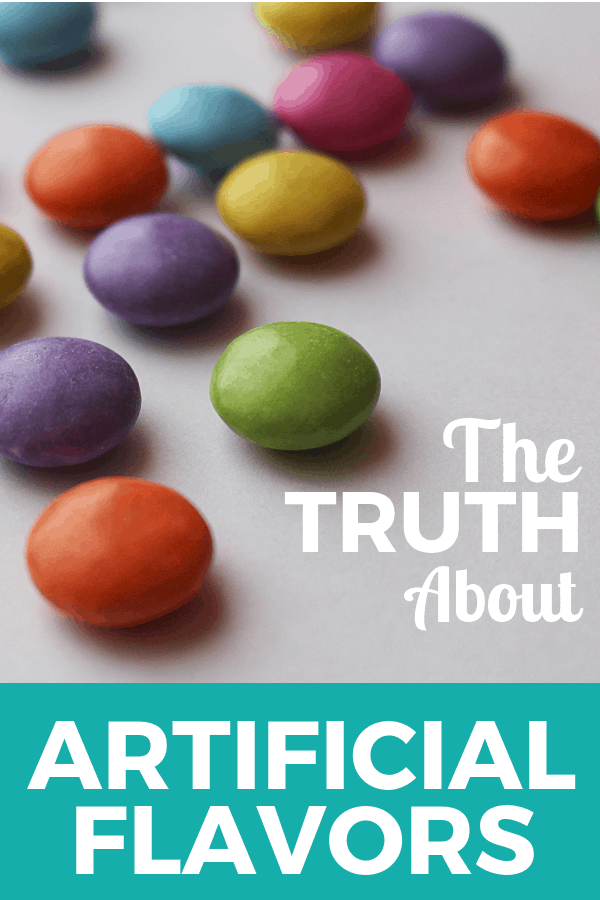 What Are Artificial Flavors?

First, let’s define “flavors.” A lot of people think it’s the same thing as “taste,” but the two terms are actually different. Flavor involves our perception of food based on a mixture of senses:

Whether natural or artificial, all flavors consist of various chemicals and compounds, some of which can be bad for your health, especially if consuming large amounts on a daily basis. For a technical artificial flavors definition, let’s look at what the FDA says:

“The term artificial flavor or artificial flavoring means any substance, the function of which is to impart flavor, which is not derived from a spice, fruit or fruit juice, vegetable or vegetable juice, edible yeast, herb, bark, bud, root, leaf or similar plant material, meat, fish, poultry, eggs, dairy products, or fermentation products thereof. Artificial flavor includes the substances listed in 172.515(b) and 582.60 of this chapter except where these are derived from natural sources.”

Basically, they are created in a lab by flavor engineers who have studied consumer preferences and know how to manipulate compounds to produce the desired taste.

According to the FDA, artificial flavors are not considered harmful in moderate amounts – despite anecdotal evidence saying otherwise.

Side effects of Artificial Flavors

Problems to your health arise when food manufacturers lower their standards for profit and use chemicals and ingredients that result in health problems over time.

The chemical combinations used to produce artificial flavors have been known to cause:

One 2018 study published in the Brazilian Journal of Biology revealed the potential dangers of artificial flavors in an undeniable way.

Researchers fed a group of mice:

All of the mice fed these synthetic flavors died by day 6 of the experiment!

Tissue samples revealed that the flavor additives had toxic effects on their genes and cells.

Some other risks of artificial flavors include their ability to trick our brains into preferring their taste over that of whole foods.

Neglecting nutrient-dense foods can lead to a number of nutrient deficiencies, which are linked to a whole host of health problems.

Synthetic additives can even be addictive in nature, making us reach for another bag of chips instead of a wholesome salad.

Want to learn my complete system to cleanse your body of these toxins? Click here!

This is by no means a comprehensive list. Like I said earlier, there are over 3,000 artificial flavors recognized by the FDA today.

The following list of artificial flavors, however, includes the most common varieties, and therefore the ones you’ll want to keep an eye on.

MSG is found in many processed meat products or foods that have a high degree of spicy or otherwise savory flavors associated with high amounts of salt.

Millions of people experience immediate side effects from consuming it without being aware of it. Some of these include headaches, sweating, nausea, fatigue and even rapid heartbeats.

BHT is a chemical that’s used as a common flavor preservative. There is strong evidence that links BHT to development of cancer cells.  It’s also been indicated in developmental issues and even liver tumor growth in rats.

Similar to BHT, BHA is a common flavor additive in chips and meats. Despite being allowed in our food, the International Agency for Research on Cancer says BHA can cause cancer. Besides that researchers believe it can interrupt proper hormone function.

Sodium Benzoate on its own isn’t so bad until it reacts with citric acid and other forms of acid used in mass production of packaged foods. Then it has a cancerous effect on the body and has been linked to blood cancers like leukemia.

If that doesn’t put you off enough, you should know that it has been linked to the development of abnormal kidney and liver functions that can lead to feelings of fatigue, confusion and nausea.

While this may sound innocent enough to most people, the way high fructose corn syrup is produced is anything but.

HFCS is basically made up of cornstarch and 3 different kinds of bacteria. It is made by fermenting corn starch several times in order to produce an unnatural mixture of glucose, fructose and other forms of sugar that are known to cause diabetes and obesity.

HFCS is found in most sodas and a host of packaged food products consumed everyday by millions of Americans.

Propyl gallate is a leading flavor additive in fatty foods like sausage and other fatty or oily meat. It’s been indicated in severe asthma attacks and has been shown to induce liver and kidney damage.

Artificial sweeteners were created as a way to reduce people’s sugar intake without having to actually give up sweets. The dangers of these artificial flavors are just now surfacing and include:

Sucralose is one popular artificial sweetener that has been linked to cancer and high blood sugar levels that lead to diabetes. It’s found in energy drinks and other beverages as a way of intensifying sweetness. Other common artificial sweeteners include aspartame, sorbitol, saccharin, and acesulfame K.

This one isn’t so much a danger as it is a disgust.

Vanillin is the compound responsible for the lovely taste of vanilla. When found in nature, it is extracted from an orchid plant found in Mexico.

But the extraction process is too complicated and expensive for most manufacturers, so they prefer to use a synthetic version.

Here’s where it gets disgusting.

In 2007, a researcher named Mayu Yamamoto set out to discover a way to create vanillin as cheaply as possible. She found her answer when she successfully extracted vanillin from cow feces.

Instead of being dismissed for even thinking of such a thing, she was given the Ig Nobel Prize from Harvard.

I mentioned in the section above a few foods that contain artificial flavors, but here is a more comprehensive list:

Basically anything packaged is cause for suspicion. There are some healthy, additive-free packaged products out there, but they are few and far between. Which leads me to my next point…

How to Avoid toxic Artificial Flavors and additives

Unless you are purchasing a whole food (fruits, veggies, meat), you need to read the label VERY carefully.

Look for any words that you can’t immediately identify as a real food.

Most of us keep our smartphones with us at the grocery store, so pull it out and run a quick search for “ingredient name” and see what comes up.

One of the more sneaky dangers of artificial flavors is how they can be masked under other names. For instance, MSG is often written on labels as glutamic acid or magnesium glutamate.

Names like that don’t sound off alarm bells quite as much, so you really have to be diligent.

Ultimately, the best way to avoid harmful additives is to stick to fresh, organic produce and grass-fed meats.

I know we all have days where we just don’t want to cook or meal prep and need something to grab and go.

So here are some of the best brands that are free from artificial flavors.

Avoiding these kinds of food additives and others depends on how careful you are about reading labels.

Always read food labels and take note of additives you have never heard of. Do your homework on them.

Sure, it may take a little longer to look up ingredients, but at least you know what’s going into your body and what you’re feeding your family.

And remember, your health is worth it!